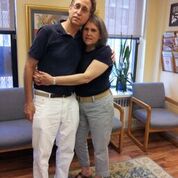 Michael J. Mand, D. D. S.
Dr. Mand is a general dentist who comes from a dental family. His grandfather, Jacob H. Mand, opened the practice in which he still treats patients, in Sunset Park, Brooklyn, in 1919. His father, Stanley M. Mand, joined the practice in 1950, after a stint in the Air Force. Michael joined his dad after graduating from New York University College of Dentistry, in 1979. It has been his goal to keep the practice open until at least the last day of 2019, to ensure that it will be 100 years old. That goal is clearly within reach.
In addition to his private practice, he has been associated with many different hospital residency programs starting with Greenpoint Hospital and Brooklyn Jewish Hospital which became Interfaith Medical Center. His other affiliations have included Long Island College Hospital and Long Island Jewish/North Shore Hospital (now Northwell). Currently he is an attending dentist in the residency program at Jamaica Hospital in Queens, NY. He definitely enjoys sharing his knowledge that comes from experience with the newest members of his profession.
Dr. Mand has a side interest in radio. He produces and hosts a weekly web-based eclectic music show called ‘St. James Infirmary’ for three hours on Friday afternoons broadcasting from the radio studio at SUNY Old Westbury in Old Westbury, NY (OWWR) where he identifies himself as Michael The Molar Maven. He has an extensive music collection from which he draws his playlist each week.
Dr. Mand is also active in his synagogue as well as his community civic association.

We will do our best to accommodate your busy schedule. Request an appointment today!

Font Resize
Contrast
Accessibility by WAH
Call Us Text Us